This article from JP Morgan Securities Australia shared with permission.

Victoria was struck by an earthquake that caused damage in Melbourne. Our interpretation of media reports and early estimates of losses suggest that economic losses are likely to be ~US$100m – with insured losses for the whole market likely to be less than the total economic loss. If our reasoning is correct, the biggest risk in our view is if there are aftershocks that are large (risks of aftershocks are elevated straight after an initial earthquake). We have not modified any of our earnings, and believe SUN has greater risk than IAG and QBE if it is a large event through its higher maximum event retention – however IAG has greater exposure to Victoria.

What we know about the earthquake. GeoScience Australia has reported a Magnitude 5.9 Mw earthquake at 9:16 am North of Rawson in Victoria at a depth of 10km. This is approximately 100km from Melbourne CBD. Normally earthquakes near high population density zones are amongst the scenarios (along with cyclone risks) that insurers model for events that threaten being a probable maximum loss in deciding how much catastrophe reinsurance to buy to protect themselves.

How do earthquakes cause insurance damage? The main classes of insurance affected are home (building) and fire / ISR (property), although there could be some additional losses in classes like motor, and liability from negligent construction. Ground shaking from earthquakes is the main cause of damage to man-made structures, and this is primarily determined by (a) the earthquake’s magnitude (higher is exponentially worse – every increase of 1.0 in the Moment Magnitude increases the energy release by ~ 32x), (b) depth of the earthquake (deeper is less destructive) and the site’s proximity to the fault (exponential decay), (c) the local geology / the soil type (sandy is worse than rock as it can lead to liquefaction as in Christchurch and Mexico city). The extent of damage caused from the shaking is usually determined by (a) construction standards (Australia standards are not that strong as it is seen as seismically less active, but compliance is likely to be high), (b) construction material (brick worse than wood), and (c) insured values (Australia would have high exposure here with high take-up of insurance and no exclusions)

What do we think about this Earthquake’s likely impact on the insurance industry – quite limited: So far, (1) media reports are suggesting there are some damaged buildings in Melbourne, but we have not seen reports of any deaths. Pictures of damage appear to be somewhat limited (although there are some concerning images of a few buildings in parts of Melbourne where there is clear structural damage); (2) The USGS estimates economic loss likely to be in the US$1-10m range (37% probability) – with a 23% chance of being between US$10-100m – and a 6% chance of being between US$100-1,000m. Insured losses are likely to be lower than these numbers as not all losses are likely insured; (3) Geoscience Australia (see Figure 1) shows limited shaking in populated areas around Melbourne. JPM Comment: We think the considerable distance from major population centres like Melbourne and soil type limiting shake intensity have likely limited the extent of insured damage. We don’t think the event will threaten the retentions of IAG, SUN or QBE. The risk of repeated tremors remains the biggest risk in our view judging by past earthquakes including in New Zealand. If losses do become elevated, we are likely to see reinsurance costs rise, but also premium rates rise as well. We show in Figure 4 the GWP we estimate in Victorian property for each of IAG, SUN and QBE. 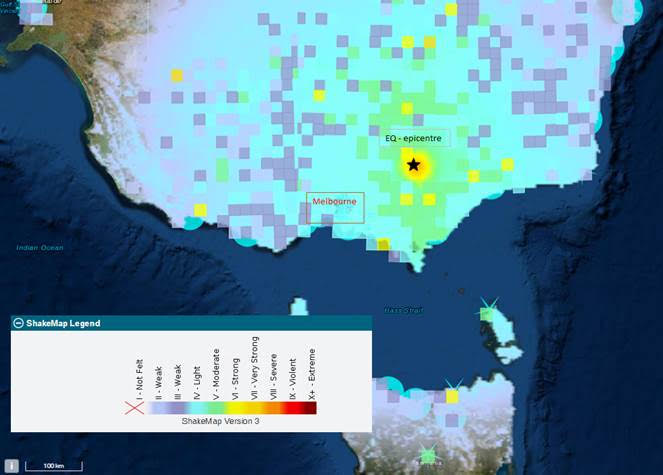 Figure 1: “ShakeMap” intensity from the event – it seems most damage according to early indications near Melbourne is in light to medium band.

Figure 2: Macroseismic intensity from the event – it seems most damage according to early indications near Melbourne is in the very light band.